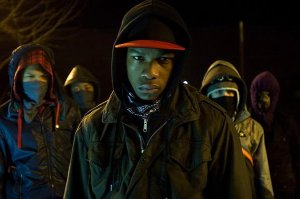 Billed as a Sci Fi film, Attach the Block is one of the best action films of the year.

On Guy Fawkes Night, the night commemorating King James I surviving an attempt on his life, a gang of teenagers mug a young nurse on her way home. During the robbery, a strange object falls from the sky.  Believing the object is some sort of firework, the teens continue their attack.  Upon being attacked by an unknown creature, the teens lead by Moses (John Boyega) set out to kill the creature. Believing the strange being could be profitable, the teens look to hold it in a secure location.  This decision sets off an chain reaction that is both funny and thrilling.

As the invasion continues, we get to know the young teens and the people who inhabit their block in South London.   Because of the circumstances Sam the nurse (Jodie Whittaker) teams up with the teens in order to survive the night.  She is eventually won over by them as the audience is.