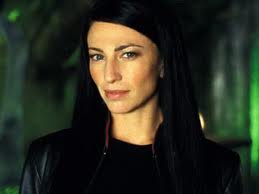 (Farscape and The Peacekeeper Wars)

With a host of strong characters on Farscape and Farscape: The Peacekeeper Wars, Aeryn Sun is one of my favorites.  We see her go through a transformative journey during the run of the show. When we first meet her, Aeryn is in uniform concerned about ranks and regiments. Officer Aeryn Sun, Special Peacekeeper Commando, Ikarian Company, Pleisar Regiment is a solider first and foremost. She is born of and born into the Peacekeeper life; meaning that she obeys orders and looks to move up the ranks to be the best solider that she can be.  While on a mission to recapture a ship full of prisoners, Aeryn’s life is changed forever.  Would a loyal solider choose to help a person from an unknown species?  In the pilot episode, Aeryn begins to distinguish herself from the traditional ways the Peacekeepers behave. After being declared irreversibly contaminated, she joins the escaping prisoners instead of facing a slow death. This decision puts her on a path that she never could have imagined before.

On Moya, she forms new relationships and learns of the joys of friendship and camaraderie.  In Thank God it’s Friday… Again, with the help of Pilot and to much of her surprise, Aeryn performs simple scientific experiments in order to aid Rygel while the others are trapped on an alien planet.  After being given Pilot’s DNA, Aeryn develops an intuition about leviathan that always remains with her. Time and time again, where there is a need, Aeryn steps up to full fill the void.  In Jeremiah Crichton with the others stuck on a planet with a dampening field, Aeryn and Zhaan are able to create and launch a probe in order to assist Dargo, Crichton and Rygel who were trapped on the planet.

You can’t have a discussion of Aeryn Sun without mentioning John Crichton.  In the beginning, she thought he was a useless a lesser creature but she begins to rely on him more and more with each new challenge they face.  They eventually fall in love but face many obstacles – a princess, death and a Crichton double to name but a few – but as all good epics they wind up together.  Theirs is an epic love story and one of the best onscreen couples ever.