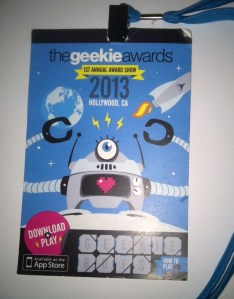 When I found out about the Geekie Awards, I was hyped to go. I asked a few of my nerdy friends to go, but alas no one was interested. I decided to bite the bullet and go it alone. Now, I am an independent geek who will dine alone, go to the theater or travel by myself, but sometimes facing certain situations alone is difficult for me. Going to an award show is one of those situations. One thing about me, I hate small talk. I can never think of anything to say to a stranger. I’ve read all of the tips: ask questions, wear an unusual accessory, etc. But how can one stand out if you’re going to an event were people are encouraged to COSPLAY?

I threw on a pretty frock, some red lipstick and a flower in my hair and off I went. When I arrived, I was confronted by a huge line of people waiting to get in. I tried making small talk as I waited in the long line to get in but it was AWKWARD. After a long wait, I was finally shepherd in to my seat in the balcony. It was dark and daunting. I grab a seat in the corner and settled in for the night. And what a long night it was, I didn’t speak to anyone. As I was driving, I opted to pass on the liquid courage. I wasn’t relaxed enough to try small talk again, so I sat and tweeted. All was not lost though, I learned about some really cool sites: The League of Steam, Fire on the Mound, Geek Speak Live.

Since the show, I’ve realized that it is okay to be an introvert and every social situation is not for me. And there is no reason for me to try and force the situation. I am pretty social within my small group and I will no longer try waste energy trying to be something that I am not.