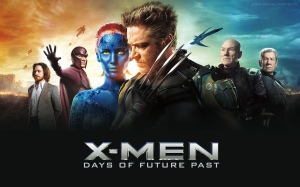 X-men is not my favorite franchise. There is something about this series that just doesn’t click for me. Next up in the series is Days of Future Past which focused a lot on Mystique/Raven (Jennifer Lawrence), but this movie is really about Professor Charles Xavier (Patrick Stewart & James McAvoy). The story starts off with a dark world at war. An army of high tech killing machines have been unleashed on the public to eliminate all mutants and their human allies. An unintended consequence is that the same assassins designed to sense mutant DNA to identify their targets also develop an ability to target every normal human with the potential of giving birth to a child with mutated genes that can be passed down. With the mutants facing extinct at the hands of the Sentinels, our core X-men group decided to send back one of their own to prevent the Sentinels from ever being created. If the audience doesn’t get a brain cramp from sorting out how the future influences the past, how the past influenced the present and how changing events in history affects both time periods, Days of Future Past has enough action to be entertaining.

The strongest asset of Days of Future Past is its appealing cast: Hugh Jackman, Patrick Stewart, Ian McKellen, Michael Fassbender, James McAvoy and Peter Dinklange really a lot of star power to this middling tale. The X-men franchise has a serious continuity problem and this movie does its best to client it up but it’s not a must see.